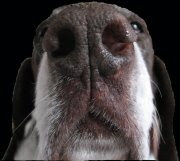 I come home from picking up prescription food at vet, and there sits Pongo, a long bloody booger hanging from his nose. Why is this dog bleeding? Drop the food, pick up the dog, go back to the vet and ask her. After another visit and some diagnostic work, bad news. The two most likely possibilities are nasal cancer, and fungal disease. Both are treatable, but we must make a definitive diagnosis first, which involves anesthesia, scopes, biopsies, at least 48 hours at the vet, and several more days of bleeding.

And then what? Treatment. If it's cancer we could board Pongo for 3 or 4 weeks at a specialist vet in another city for radiation treatments. Most dogs have a 50% chance of living a year after that. If it's fungal disease, its one or more 24 hour vet stays during which Pongo gets anesthesia and has his nose filled with Lotrimin, with a 60% to 80% chance of cure, but with a chance of recurrence.

On the other hand, Pongo is 14, and he has kidney disease, too. Even without nasal disease, he is on his way out. It isn't clear that further diagnosis and treatment would significantly prolong his life, or even add to its quality.

You see, Pongo has lost 1/5 of his body weight over the past year. He hasn't been eating much, not even what were once his favorite foods. And now we know why. He has been losing his sense of smell. To a dog, if it doesn't smell like food, it isn't food. He has been starving, and wondering why we keep offering him this inedible cardboard stuff that just looks like food.

So, we have a temporary fix: stinkier food. Pongo is eating well again. His nosebleed and snuffling/snorting symptoms appear to be in remission for now. He is happier than he has been in a long time.

It is not clear that treatment of any kind would restore his sense of smell. Whether it's cancer or fungus, the damage may already have been done. What's more, cancer treatment may cause nerve damage that could make the sense of smell worse, as well as cause blindness. Not a recipe for a happy dog. Especially for a dog who just wants to be with us.

Pongo has stopped sleeping in his chair downstairs (a long story - if you're able to keep your pets off the furniture, you probably don't own a German Shorthaired Pointer) and moved upstairs to sleep next to us. He can no longer smell us from downstairs, and if he can't smell us, we're not there. So he's moved upstairs to be less lonely and insecure.

As his sense of smell fades, we will fade. He will be living in a house of people who look and sound like us, but we will have vanished. He will stop eating. And then, for him, everything will fade. Fade to black.

Clumber sends a tail wag out to Pongo... his heart breaks for all you have written about, having lost our dog to similar circumstances...

Thanks, Clumber. But there's still a bit of life in the old dog yet. Today, the Sunday of the Resurrection, we took our dogs for an off lead ramble after church. And Pongo, to his exuberant joy, found and ate a rabbit's head in its entirety. For the next hour, he ran around as if her were a year younger.

Yes, even though he himself is dying, he managed to eat and enjoy his Easter Bunny.