Health Care Reform could be really easy. Did you know that every health care provider is free to charge anyone whatever they can get away with? The result is that every insurance company negotiates with every provider organization (hospital, medical group, etc.) over what price they are going to pay for what procedures and services. A big insurer can command low prices, so the costs get shifted to the smaller insurers. The result is that some insurers will pay $1500 for an appendectomy at a given hospital, while others pay $13,000. No wonder you can't find out what your hospital bill will be in advance. Nobody knows until all the insurance codes get put in, and the database lookups are done.

Now, people have to be hired and paid to do all that negotiating and to enter in all those insurance codes. Here is an opportunity for reform. Make cost-shifting illegal nationwide (not just in Maryland). Each healthcare provider (including pharmaceutical companies) organization can charge whatever they want for any given service, product, or procedure - but make them charge the same to everybody. And force all insurers to use the same codes for the same things.

A lot of people would lose their jobs, but healthcare costs would come down.

Without doing these things a "public option" would just bring the Government in as another big insurer, commanding low prices, and the costs would get shifted to everyone else. It would actually make the cost of healthcare go UP for most people.

But, noooooooooooo. We have to enact a public option to "compete" with private insurance companies, because competition drives prices down. Not so in this market. The healthcare market is neither free nor regulated. A public option would have the opposite effect to what is intended. At least until the private insurers are cost-shifted out of the market in just a few years and we get the Government as single payor. Then only the really rich or well-connected will be able to afford the best healthcare. The rest of us will get Government rationing.

That is to say, we need healthcare reform. But the bills under consideration don't fix healthcare. They just make the problem different, and for the most part, worse.

Why do we keep re-electing swine who dedicate all their thought and energy to political posturing and none to actually doing the right things?
2 comments: 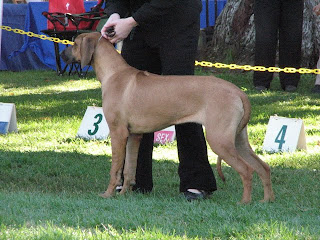 We entered Ruby in her first dog show, and she was in three events this Saturday and Sunday. Here she is being handled by one of her breeders in the 6-9 month class. At 6 months and 2 days, she was the youngest puppy in the ring. She didn't win any prizes, but she didn't get excused for misbehavior, either. We and her breeders were quite pleased.

Since the show was within walking distance of our house, we invited her breeders and their three adult Ridgebacks (Ruby's mother, father, and aunt) to stay with us. Ruby made everyone play until we were all exhausted. Sort of like family camp for canines. It was quite a weekend.
2 comments: 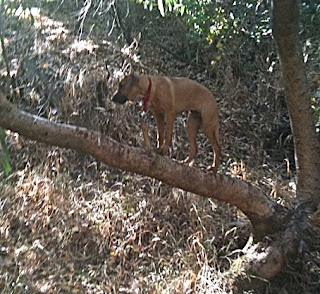 Ruby is now adolescent. She has all her adult teeth, although some are not quite finished emerging. Thus armed, she has taken an interest in squirrels, which naturally leads to an interest in trees. Indeed, she has discovered that some can be climbed.

She has also discovered how to unlatch our gates. After confirming with the neighbors that she could let herself out at will, we put locks on them. This is only the beginning. She's a clever girl.
2 comments:

Ruby has inherited The Pink Hedgehog from Maya and Nessa. You might wonder how the thing could survive two Great Dane puppies, but it has a formidable squeak. It hurts Ruby's ears, but she can't resist chewing it at least once or twice a day. Happiness, at least in part, really is a warm puppy.

There is no such thing as centrifugal force, the force you feel pulling outward when you swing a heavy object around. It is an illusion. There is only the natural tendency of the object to go in a straight line, and the centripetal force, the force you exert to pull the object back toward the center that keeps it from going in a straight line and forces it to move in a circle. I find it remarkable that the frail little woman my mother had become was the centripetal force that held together the world of the household in which we grew up and the network of extended family and friends that provided the society that brought us to adulthood and anchored our existence in a comforting web of relationships.

Now that world is flying apart. Her brokerage account has been liquidated to pay her debts. Her remaining assets have been distributed to her heirs except for her IRA, which Chase Bank seem unable to part with. The house in which she lived for 53 years has been sold, and its contents given away, sold, or auctioned. Many of her friends and relatives are getting old and dying themselves, or otherwise losing touch. Even though they all knew her, they do not all know each other or how they are related. Some met for the first time at one or the other of the two memorial services we held for her near the East and West coasts.

Bits and pieces of her world have landed here. Her "basket of gems" lamp now hangs in our hallway. Her prized antique, hand-operated, wooden washing "machine" stands as a planter in our living room. The wooden secretary chair that both she and my father used sits next to our piano. The VD poster from post WW II Japan hangs inside the door of our study. I suppose that I will look upon them fondly someday. But now they're jarring reminders that they are here and not there. They are out of the context where I remember them being. A context which no longer exists, because it was given life by her living in it.

I haven't been writing, because I haven't been reading. I come home from work, do what I have to do, and then go to sleep and get up and go to work again. There hasn't been time. Or more accurately, I just haven't had the extra energy.

But I'm coming around. This post, after all, is something. I'm enjoying our new puppy, who is ideal for us at this time. It's amazing how much comfort I can get from the sound of her chewing a cow's hoof. I'm getting to like riding my new recumbent bicycle, which I bought because I can no longer ride an upright bike due to nerve damage caused by those narrow saddles. I got it just in time, because outdoor exercise is how I keep my spirits up when the days grow short, and winter is coming on.
4 comments: