Why is Bin Laden still alive? 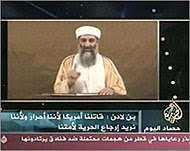 The most frustrating things about Usama Bin Laden are that he is still alive (most likely), and still at large. I use the transliteration "Usama" because it renders his initials as UBL, which can be pronounced "übel," the German word for "evil." As is usual for fugitive cases, his continued liberty depends on who is hiding him and who is hunting him.

If indeed he is somewhere in the mountainous part of Pakistan that borders on Afghanistan, he is protected by the local population, who probably regard him like we regard a popular celebrity. This is in stark contrast to the situation of Saddam Hussein in Iraq. By the time we caught Saddam, he had no friends, and one of his enemies turned him in. We had military "boots on the ground," in Iraq, indeed, all over the ground for a time, and we still needed a tip to get Saddam. By mutual agreement, we do not have military boots on the ground in Pakistan. But even if we did, finding UBL would still be extremely difficult. So much for who is hiding him.

If you think about it, there are probably two US organizations hunting him: the CIA and the US Military. The US Military has a custom that may impede their effort to "find, fix, and finish" UBL - soldiers change duty stations every couple of years. To get UBL or any other fugitive, you either need a lucky break, or you need a team of the best dedicated, talented professionals available, and you need to keep them on the assignment until the job is done. They need to spend years getting to know their quarry, the terrain both geographic and social, and on, and on, and on. There is a lot to know, if you don't get lucky. If you want to get a feel for the problem, just watch HBO's "The Wire." The hunters keep getting taken off the trail by political, economic, and social forces. They are frustrated because every time they get close to making a difference, they are disbanded. By the time they regroup, the game has changed.

The CIA may do better, but one wonders how they reward people who do the same job year after year and still come up empty-handed. Their top guy published a book summarizing what can be known from open sources, Through Our Enemies' Eyes: Osama Bin Laden, Radical Islam and the Future of America, shortly before he retired. It may be that those who want a successful career just move on after a while.

But if Bin Laden is in Pakistan, how did he get there? Recall that the Bush Administration tried to court world opinion (including that of the Islamic world) by using minimal force to invade Afghanistan. The US used its troops to tip the balance of power between the Taliban and the other local militias. That was all it took to crumble the Taliban regime. But in a region where warfare is a way of life, one seldom seeks to destroy one's enemy. After all, the shoe may be on the other foot on another day. And thus, according to local custom, top al-Qaeda leaders were allowed to escape. It was not a deliberate choice of the US, but simply due to our relying on local fighters without our knowing the local way of war. Had we unleashed the Rumsfeldian blitzkrieg on Afghanistan instead of Iraq, we might have gotten Usama instead of Saddam.

Now, getting UBL will require us to implement and maintain a slow, careful, painstaking, patient counter-insurgency strategy. From their rhetoric, it seems to me that Mr. McCain understands what that is, while Mr. Obama hasn't a clue (although he will probably be a quick enough study, one hopes). If you're curious, see John Nagl's Learning to Eat Soup with a Knife: Counterinsurgency Lessons from Malaya and Vietnam, or better yet, his new U.S. Army/Marine Corps Counterinsurgency Field Manual that he wrote with Generals David H. Petraeus and John F. Amos.

Make no mistake about it, the Bush Administration has been trying to get Usama Bin Laden for a long time. But along the way, "mistakes were made." Let's hope the next administration will learn from them before changing course. Again.