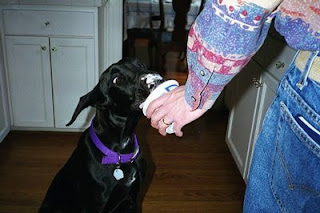 This Thursday past, we sent our Great Dane Nessa to walk with our Master. We were facing at heat wave and fireworks, either of which could have precipitated a terrifying and agonizing death for her, and she was on her last legs as far as getting into the car was concerned. Her death was peaceful, as was her life, considering that she was, after all, a dog.

And she was our dog, or rather we were her people. From the moment we brought her home she liked the place. She explored it quickly, even going up and down stairs (a thing she had not encountered before), and settled in. She didn't whine her first night. So intent on claiming the territory was she, that she ate the rosebush under which we had buried the ashes of Maya, her predecessor. We didn't punish her for it, and it was the only one of our plants she ever destroyed. She chewed it to bits, thorns and all. It seemed like a kind of doggie exorcism.

Her greatest enthusiasm was food. She is shown above as a puppy relishing her first taste of sour cream! The greatest tragedy of her life was that she became lactose intolerant, and had to do without it in her last years. This was more than compensated by our discovery of liverwurst as a medium for administering her medications.

Her second greatest enthusiasm was fur-to-skin deep conditioning aromatherapy spa treatments which she would self-administer by rolling in carnivore scats, or preferably cow manure. (Horse manure was a problematic decision - should one wear it or eat it?) Once during a walk through what turned out to be a pasture, she encrusted herself from head to tail in a cow manure rind over an inch thick. We had to shout to other hikers not to pet her lest their hands get stuck. Cleaning her (and our car, and ourselves) took hours, causing us to miss an opportunity to reconnect with former neighbors.

She took no trophies during her life (she didn't even like raw meat) other than title of Miss Congeniality. She was the easiest to train, most obedient, most compliant dog we have ever owned. When we put her on the lunge line we used to train Maya, our first Great Dane, she didn't lunge anywhere. She just looked at us as if to say, "OK. Where do you want to go?"

She was also a champion sleeper, having spent less than 2 of her almost 10 years on this planet in a state of wakefulness. Nevertheless, she was a quick learner of obedience commands and a student of human behavior who developed the ability to tell when we were going to take her for a walk before we knew ourselves. Or perhaps she had learned to shape human behavior rather than to predict it. She never revealed her secret.

She was the girlfriend/dominatrix of Pongo, our German Shorthaired Pointer, who preceded her in death. Although they rarely cuddled, they played until they were played out.

She struggled with early onset arthritis which eventually spread from her neck to her tail, laryngeal paralysis which gave her breathing difficulty, and female spay incontinence. This last could be spectacular: she awoke to greet us, wagging her tail which had been soaked in the puddle that appeared while she was sleeping. We were up until the wee hours cleaning the wee off the ceiling! We got this under control with PROIN (phenylpropanolamine), but in her last months she anointed the chair she inherited from Pongo so deeply that we had to let it go after she no longer needed it.

She was also great protection. When she held her head up, her nose was about chest height for an average sized person. This gave a new meaning to the phrase, "Eat your heart out," and served to help door-to-door salespeople take us seriously when we said we weren't interested. Her bark was loud enough to make the reflections in the windows waver.

As a puppy, she was afraid of children, and would bark at them. After some socialization, however, Halloween became her favorite day of the year, because she could greet the trick-or-treaters. Their parents even got used to her looming over their costumed kids. Although she was not cuddly, she was sweet and friendly, and loved to be stroked and petted. If she particularly liked the way she was being petted, she would lean on the person petting her, and sigh. 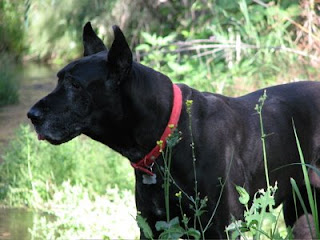 She never lost her enthusiasm for a good walk, provided it wasn't too hot or too long. This picture is from her last one.

RIP, Nessa. You deserve it.

Newcomers to this site might appreciate your Dog Funeral Service page.

Anonymous said...
This comment has been removed by a blog administrator.
25 July, 2009

Thanks all. Blainn, I deleted your kind comment, because I'm keeping quiet about my identity until I retire. Not too many more years at this point.

We know the answer already, but it is a good story.