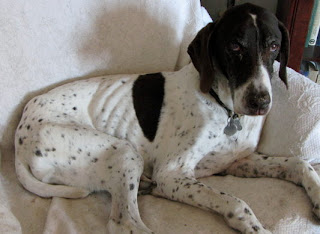 On this Michaelmas and Eve of Rosh Hashanah, we sent our German Shorthaired Pointer Pongo's little soul to walk with our Master. He was almost fifteen. He had had a long struggle with nasal disease, kidney disease, and bowel disease. In his time he overcame epilepsy and two cancers. What we know of his lifetime trophies include two squirrels, two birds, and a vole. It is impossible to tell of his victories over gophers, because we never saw evidence of any in our backyard during his lifetime. He also successfully hunted and destroyed two sprinkler systems (until we learned not to use impact heads), two screen doors (one wood, one metal), two sets of interior wooden shutters, and part of a wooden deck. In his prime, he was known for his speed, his daring, and his obliviousness to the numerous athletic injuries he incurred by doing things like running through barbed wire fences, and pawing at the neighbor's Rottweiler.

He was originally brought in to our pack to take the pressure that our first Great Dane Maya, then a puppy, was putting on our first dog, the then aging Samwise. This he did admirably. When we would come home from work, Maya would stagger in, look at us as if to say, "Take the child," and collapse with exhaustion. Maya could outrun him on the straight stretches, but Pongo could out maneuver her in the corners. The would run back and forth in our yard until Maya had raspberries on both sides of her butt from colliding with the fences. Then they would cuddle together as if they were mother and son.

After Maya passed, Pongo went into emotional decline and tore off his second screen door. We then brought our second Great Dane, Nessa into the pack. Pongo brightened considerably, and did his best to move up to Top Dog, but it was not to be. When your girlfriend grows to outweigh you by a factor of three, you are going to have to learn to toe her line. Still they played together energetically, running at each other from two corners of our yard and colliding in the middle. This lasted until Pongo's back began going out, after which they switched from the equivalent of tackle to touch.

Pongo had a long prime, keeping most of his speed, enthusiasm for life, and strength until the past year. His strength of will never left him. Although he was not intellectual, he had strong opinions, which he advanced with cunning and patience. He seduced our late mother-in-law into letting him cuddle against her legs while she sat in a favorite chair. Over two months he used techniques of operant conditioning, positive reinforcement, and desensitization to move from floor to lap, and from lap to chair, conquering our prohibition concerning pets on furniture and making the chair his own.

Really his own. It smells like him, even to a human. We had fantasies of putting his corpse in the chair, and the chair on a wooden barge on a lake, and burning the lot together in a Viking style funeral. As it is, we will probably get it reupholstered and keep it in memory of him. He is pictured above, having gone from 65 to 46 pounds because of his illnesses, in the chair that he prized so much.

Farewell, little fella. May you be as blessed in the next world as you were a blessing to us in this one.

For those of you in similar need, here is a link to a canine funeral service.

Note added 9/30: And then there was the time he ate the car. For some forgotten reason we had to leave him unattended in our vehicle for a few minutes. He chewed the steering wheel, ate the ends off the gear shift and emergency brake levers, and completely severed a seat belt. Fortunately, we were thinking of trading in the car anyway. Pongo just accelerated the process by a few months.

Our prayers are with you, and thanks for the canine funeral service link.