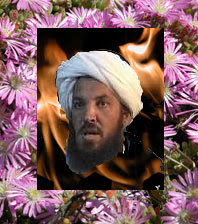 We announce the marriage of Abu Laith al-Libi, a senior al-Qaeda commander in Afghanistan, to the dark-eyed hounds of hell. The Times Online has an informative article.

Let me take this opportunity to remind you that the world is at war so long as al-Qaeda and its benighted Islamofacist soul-mates can draw enough of a following to play on the world stage. I figure that the social movement they represent will take about 70 years to die out. It will be killed by the adolescent rebellion of the teenagers against their Islamofacist parents. "You can go on fighting your jihad," they will say, "but we will build something for our children. We will build up, rather than break down. We will create, rather than destroy."

Until then each engagement, like Iraq, is not a war in itself. It is only a battle in the larger war. And while one can argue that going into Iraq was a mistake, it will be a worse mistake to pull out before the Iraqis are ready for us to do so. It would be another betrayal of a whole people, and another sign to the Islamofacists that we cannot prevail against their insurgency. That would make them bolder. And since there would be no Americans for them to kill in Iraq, they would have to try harder to kill Americans and Europeans in our homelands.

Nevertheless, another Islamofacist has been cured of his lead deficiency. Amen to that.