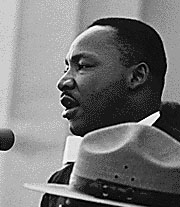 A hero, Martin Luther King, Jr. confronted death with courage: a saint, he enriched the souls of even his bitterest enemies. The same can be said of his Islamic alter ego, Malcolm X — Mr. X was less intentional about the second attribute, but he did do it, and toward the end, he was certainly coming around. But we are here to remember Martin — Malcolm has yet to have his day.

Of the life and times of Dr. King, we can read David Garrow's Bearing the Cross, of King's words, we can read his Testament of Hope. Rather than dwell on what can best be dwelt on elsewhere, I would like to reflect on how this man changed the face of racism in America during his short life, and how he served God.

A more-or-less overt racism used to be one of the "conversational cues" by which all good white people could tell that they shared a common set of values, and thus that they could associate safely with one another. In sociological terms, it was a sign that one shared the mythological self-understanding of the white tribe. "Of course, they live in their part of town, and we live in ours." Of course.

Now that same racism is a sign of stupidity, stubborness, and psychopathology. It is expressed only by those so low in the social strata, or so low in self-esteem, that they feel themselves to be beneath everyone except an imagined other.

White racism has changed from a fortified wall — you could get over it or around it, but they'd shoot you if they saw you — to a sea of jello: you can get through it, but the going is slow and difficult. Racism is gone from the really big things like voting, but it survives in the little things like getting stopped for DWB - Driving while Black, and the little things add up. Generally speaking, they still live in their part of town, and we still live in ours. Of course.

The little things, which when taken together often add up to economic things, were what Dr. King had begun to work on toward the end. That struggle continues to be waged today. The presence of a growing black middle class is evidence that it is being won.

The presence of black ghettos is evidence that for many, it is also being lost. The combination of race and class can still be dangerous — poor young black men are still more likely than members of any other group to wind up in the criminal justice system, and — more to the point — to die while in police custody. [Note added 2016: or at the hands of police - yes, Black Lives Matter.]

Nevertheless, a profound change for the better has been effected. In large part, it was effected by a single man, who despite his casual extramarital encounters, had proved himself to be the moral and intellectual superior of both his detractors and supporters. For Dr. King went where the Spirit led him, and did what he was led to do, even unto death, unto bearing the Cross. And he did it with a Shakespearean, a Biblical command of the language of all his people - black and white. Like Shakespeare and the Bible, his phrases ring in our hearts, "I have a dream," and "not by the color of their skin, but by the content of their character," and, "How long? Not long — because the arc of the moral Universe is long, but it bends toward justice." And in the end, "I may not get there with you, but I have seen the Promised Land!"

A hero, he confronted death with courage: a saint, he enriched the souls of even his bitterest enemies. We are all better off for his having been among us, for his having preached to us. Even those of us who were only children then, or who were not there at all, miss him.
No comments: