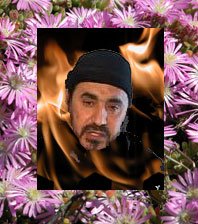 We are pleased to announce that Abu Musab al-Zarqawi, named by Usama bin Laden as the "Prince of al-Qaeda in Iraq," was wedded to the dark-eyed hounds of Hell on June 7, 2006 in the Common Era. He was a high-school dropout, sometime drug dealer, child-molester, and master-mind of numerous killings, bombings, beheadings (for the amusement of his fellow internet pornographers), and the deliberate incitement of sectarian violence in Iraq by killing both Shiite and Sunni Muslims, and destroying their holy places. To his dying day he denied that the Will of God could be made known through the Will of the People. Rather, he acted out the belief that the Will of God could only be made known through the Will of a Single Man, such as himself. By thus projecting his own demonic impulses onto a false god he created of his own stunted and bitter imagination, he joined the idolaters. By calling this idol of his imagination Allah, he joined the blasphemers. By representing this idolatry and blasphemy as the one true Islam, he joined those who insult the Prophet and his followers. For his idolatry, blasphemy, and insult he would have deserved a painful death in this world and an abasing chastisement on the Last Day. However, since he committed so many murders in the name of his perverted beliefs, and encouraged so many others to do likewise, it is impossible to imagine the doom that he must taste.

May those who take up his sword after him follow him to his Judgment swiftly and soon, for the peace of the world and the Glory of God.
No comments: