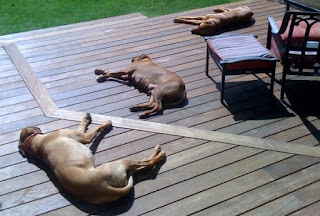 Here is Ruby (foreground) with her mother and father, at her breeder's house. Mom (aka "Milk Bar") is nursing Ruby's nine new brothers and sisters, while Ruby and Dad have been hitting the dog show circuit. In the past three weekends, Ruby has taken one third place, two second places, and two firsts. She's back home tonight, resting from her labors. Actually, dogs seem to do a lot of resting, no matter what.

Today is Memorial Day, on which we remember those patriots who have refreshed the well-spring of liberty with their blood. Let us also remember those survivors who left pieces of themselves (physical, emotional, or both) on the battlefield. You don't have to go it alone. To all of you who have returned, thank you for serving, and welcome back.

We now have pictures of both our fathers in WWII Army uniforms. My father was on the American side, my wife's on the German. Let the old wounds heal. The rest of what I have to say is in VCBC's Military Chapel.
2 comments:

The Simon Wiesenthal Center is hosting these here. They're pretty good, so I thought I'd pass them along.

As Josh Billings used to say, "It ain't ignorance that hurts folks. It's all the things they know that ain't so."
No comments:

What a Little Bird Told me about SETI

Dr. Paul Foldes, of blessed memory, once told me this joke:

A small bird was starving one winter. It was so cold, he couldn't fly any more, and he fell to the road. Just then a horse-cart passed over him, and the horse dropped a huge load of dung on him. The dung warmed the bird, and the seeds in it fed him. Soon he was feeling so cheerful he started to hop around and sing. The commotion attracted the attention of a passing wolf, who pulled the bird out of the dung and ate him.

I keep the last lesson in mind when thinking about SETI, the Search for Extra-Terrestrial Intelligence in the Universe. SETI proceeds by combing the universe for radio signals that meet certain statistical criteria for being non-random and non-repetitive - in other words, not of natural origin. But suppose that some ET were out there looking for us. For a long time, say 5 billion years, there would be nothing. Then a faint glimmer of radio signals starting around a century ago. Then analog television shows from about 60 years ago. But this year, television has gone digital - which looks more like random noise to those statistical algorithms. We are going quiet, going out of radio frequency existence after only a century or so. Odds are very slim that any ET would be looking our way during that brief period of time. Which means that odds are we won't be found.

And that is a very comforting thought. Consider the energy it takes for interstellar travel. Let's say that an alien civilization had a spaceship weighing 10 metric tonnes, that it could accelerate to 99% the speed of light. If such a thing experienced brake failure (accidentally or otherwise) it would hit whatever was in its path with an energy of 5x1020 Joules, or 100,000 megatons TNT equivalent. That's more than enough to smash a planet. And we wouldn't even see it coming, because the light from it would be moving barely ahead of it. By the time we detected it, it would be too late think much about it, much less to to do anything about it.

Maybe that's why SETI hasn't found anything. Maybe all those ETs out there have done the same simple calculation that I've just done, and have decided not to draw attention to themselves. Our digital revolution is making us appear to go radio quiet. Let us continue, for in the grand scheme of interstellar society, we may be the little bird.
1 comment:

Normally, I'm not one for conspiracy theories, but yesterday's stock market gyration is just too tempting. Consider how much money could be made by executing a few thousand buy orders at the bottom of such a rapid plunge and rebound. Could yesterday's 999 point drop in the Dow be the work of a few rogue traders? A self-funded "probing" cyber attack by a government preparing to paralyze the West should the need arise to do so?

It also looks like the recent attempt to car-bomb Times Square is the result of a long-time association between the family of the alleged bomber, Faisal Shahzad, and militant leaders of the Taliban and al-Qaeda. He had become a naturalized US citizen, making him a very desirable target for recruitment by such groups.

On the other hand, back in the 1960's there was a conspiracy by the US government to cover-up certain embarrassing details of the Vietnam War then in progress by abusing the system of classifying information (in ways that are now illegal). Daniel Ellsberg blew the cover by leaking thousands of pages of classified documents (now known as the Pentagon Papers) to the press. Ellsberg was saved from prison by the Nixon Administration's botching of the case against him, while committing crimes of its own ( the Watergate break-in). Still, I was offended by the way Ellsberg described his crimes and his pot-smoking so proudly during a City Arts and Lectures interview on NPR. Civil disobedience is a serious thing. Maybe Ellsberg would be more serious about it if he had served even a tenth of the 115 year sentence for which he was eligible. I suppose I should thank him, because efforts by him and people like him ended the draft just before I would have been forced to decide between going to Vietnam as a soldier or to prison as a draft resister. I never considered Canada. As I said, civil disobedience is a serious thing. Doing it for the right reasons and taking the consequences is patriotic. Evading the consequences is not. Ellsberg talks as if he's forgotten that.

Today I have friends and colleagues whose careers include one or more tours of duty in Vietnam. I now realize that in a way, we won. The time our war effort bought the Pacific Rim economies to develop, and the pain it caused the North Vietnamese, made it impossible for one Asian government after another to fall like dominoes to Communism. So, for those who did what they saw as their duty, thank you for serving and welcome home.

I remember especially one paratrooper who had become a reservist after his tour in Vietnam. He was the only one on campus. I met him while he was in uniform, folding his parachute before his weekend training exercise. He had a lot of guts to try to make it at such a left-leaning school. We all should have been more welcoming to him. After all, he did what he did for us.
No comments: