Every time I shave, I remember the uncle who taught me how. As I let the water get hot, I remember how Mother would wipe our faces with a cold washcloth before she sent us off to school. When I put on socks, standing, balancing on one foot at a time, I remember my mother remarking that my father did it the same way. When I shine my shoes, I remember Dad teaching me the way to do it. I even use his wooden shoeshine box and the brushes he used to apply and buff the polish.

These old memories associated with ordinary things are my everyday treasures. We are indeed such stuff as dreams are made on. We are also the stuff of memory.

Perhaps my favorite memento is a faded and bedraggled toy Bunny Rabbit. Over half a century ago when I was almost four, our family dog chewed his nose, and ate his torso entirely, including most of his stuffing. I was distraught. BR was my constant companion, my Imaginary Friend. Fortunately, my father's mother was visiting us. Grandma took needle and thread from Mother's sewing basket, and a Banlon sock from Dad, and after hours of surgery assisted by my older sister, she restored to me a functional, if diminished Bunny Rabbit.

Not long after that, Bunny Rabbit disappeared. He was lost, I was told. In reality, my parents couldn't stand the idea of sending their son off to Kindergarten carrying the shabby thing everywhere, like Linus carrying his blanket in the comic strip Peanuts.

Though it was my first loss, I got over it soon enough. But years later, when I was visiting from another state after landing my first real job, Mom showed me where she had been keeping him in a trunk in the basement. I took him with me. I don't handle him or even look at him much. He lies in a glass-fronted bookcase, slouching companionably against a favorite childhood toy of my wife. My dad's old bamboo and ivory slide rule lies at his feet. There he is, partly an old toy, and partly my mother's thread, my father's sock, my grandmother's handiwork, and my first dog's spit. He's a treasure like no other. Maybe I'll leave him to my last dog to finish the job my first one started. 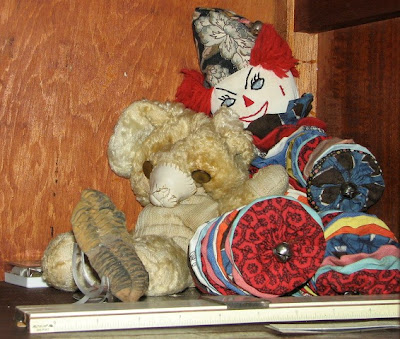 Ever since 1997, Patrick Mooney has posted The Hierophant's Proselytizer Questionnaire as a challenge to any Christian who tries to proselytize him. The deal is that the proselytizer must answer the Hierophant's 150-odd questions first. If Patrick likes the answers, he may get in touch.

A year ago, I decided to work through the questionnaire, even though I don't feel called to proselytize, so much as to apologize - as in apologetics, explaining Christianity to those interested. I wanted to use it to work through my own beliefs. My own health issues, my mother's death, and my grieving process all acted to delay my completing the project, but now, for any willing reader's comments, here it is.
No comments: