The Occupy Wall Street people seem to have no clear idea of what they want and why they are occupying anything. It turns out, however, that they may have more of a point than they realize. Take a look at this Science News article entitled, "Financial World Dominated by a Few Deep Pockets." Researchers have determined that 40% of all the world's wealth in the financial markets is controlled by 147 corporations. You download a PDF of their original paper, "The Network of Global Corporate Control," at arxiv.org.

These 147 corporations (mostly investment banks and brokerage firms) are highly interconnected. This has a number of policy implications. First, when one goes down, it can take the others with it — this can destabilize the entire global economy. And regulators in any one nation are pretty powerless to do anything about it. Second, those who want to forecast market conditions might do better to scrap their statistical models and just monitor what these 147 are doing.

What they are doing is properly the subject of further study, but I'll take a guess, which brings us to a third policy implication. I think they are concentrating wealth. True, they redistribute some wealth to buy off the forces that would try to take control of them if they concentrated wealth too fast, or too intensively. And if they really mess up, they might redistribute a lot of wealth (or a lot of debt in the case of Lehman). They give us little guys some chance to get our small cut. But over my lifetime, the average net flow has been away from the middle class in places like the US and Europe. I assume that it's been toward the big players. But that's a subject for further study as I said.

The concentration of wealth and the flows of wealth enabled by globalization and high-speed networking are things worth watching, by national policy makers acting together around the world. It is also worth watching by investors. Maybe they should learn more about their investments and actually vote their shares.
No comments: 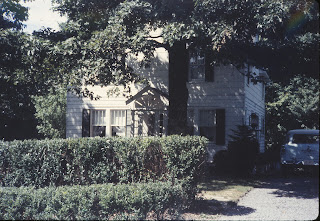 Fifty years later, in 2009, when Mother died and we sold the place, it looked like this: 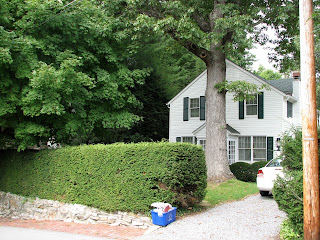 I guess my parents were inspired by the style of houses in Colonial Williamsburg. The two-story white houses with the green shutters, the old trees, and the hedges. Even their silverware was from Colonial Williamsburg, as was a pewter mug they had bought. Perhaps the look was out of place in our part of Appalachia, but we liked it, and the neighbors grew to like it, too, as they grew to like Mother. 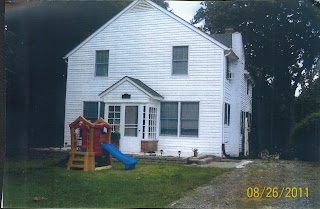 The giant old oak is gone from the front yard, as are the hedges, the eagle over the front door, and the green shutters.  Gone is the stone patio and fireplace that the owner previous to us built with one of his neighbors in back of the house. Gone, too are the stone walkways in the front yard, and the old-fashioned lamp post by the driveway. The rose Mother transplanted from her parents house when they died in the 1960s has been pulled out. No more Colonial Williamsburg. After more than half a century, the property looks more like it belongs to its Appalachian locale.

The neighbors, long-time family friends all, are taking some time to get used to it. Every time they look at it, it screams at them that Mother doesn't live here anymore.

To me, it looks as if we had never lived there. To me, it says that there comes a time for all of us when we can't go home again. And that, if we have the hubris to leave behind any monuments to our past, we had best not look back.

Now new children play in the yard, filling the place with with memories that will seem magical to them in years to come, because it will have been their childhood home.
3 comments:

A Message from Lance Armstrong


Your chance of getting cancer increases roughly as the third power of your age. It doesn't matter who you are, where you live, what you eat or drink. Cancer is rough to live with, and even rougher to die from. Whatever else you can say about Lance, he's serious about his campaign to beat cancer. Maybe you think he's a cheat. But at a time when his accusers say that everyone was cheating, that means the playing field was still level - the competition was still equalized. Whatever he did, it was below the level of detection, which is all any detection system can guarantee. I think he's a little bit crazy for living and training the way you have to live and train to win the Tour de France, year after year. And I think he's a hero, who made the journey from dying to winning. But I think he's a hero especially because of his Livestrong Foundation work. Now... what do I have to wear that's yellow?
No comments: