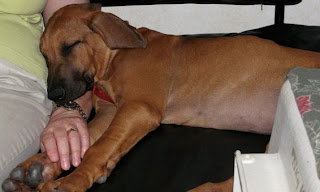 This is Ruby, our new Rhodesian Ridgeback, at 14 weeks. Today, at 15 weeks she is about 1/6 larger and considerably more active. We just couldn't resist. She now takes the baton from Samwise, Frodo, Maya, Pongo, and Nessa of blessed memory.
1 comment:

I turned off the news coverage. I'm not one of the loudmouths in the town hall meetings. I have not been organized by anybody. I just have a memory.

The last time we tried to reform the American healthcare system, the Democrats over-reached so far that they swept Newt Gingrich and his fellow neocons into a Congressional majority - specifically to stop a poorly thought-out and un-tested healthcare reform bill. The Democrats took the wrong message from this. They figured they needed to do the same thing as before, but in stages. They are now trying another such mindless and untried overreach.

They are doing so because the Republicans also took the wrong message. The Republicans figured they should do nothing about healthcare reform.

The real message was that we need healthcare reform, but not what the Democrats propose. (As if they knew. None of them has actually read the current bill, and none of them wrote it. Their staffs pieced it together and probably no one human being knows everything in it.)

What we need is to take some baby steps.

(1) For the uninsurable, mandate at the Federal level that all health insurers pay into an Assigned Risk Pool, just like auto insurers pay into such pools for uninsured motorists. Let these pools be administered by the states. That way we can get 50 parallel experiments to find out how best to do it.

(2) To promote public health (part of the general welfare mentioned in the preamble to the Constitution), continue and strengthen Federal programs to vaccinate all people living in America (legally or otherwise) against common communicable diseases. Strengthen programs to maintain and improve our nation's water, food, and sanitation infrastructure.

(3) Create a minimal national standard for providing statistically based ratings of all health care providers in terms of patient outcomes and costs for all known conditions. These ratings need to be understandable, accurate, and fair. Then make them publicly available on the internet and by other means. Mandate that providers inform their patients of these ratings.

That's enough for now. Give it a few years to see how it works. Have we improved things, or made them worse? How have providers and insurers and consumers learned to game the system? What adjustments need to be made? This implies

(4) Create a tracking system to measure the improvement in the quality, availability, accessibility and affordability of healthcare, so that we will know whether the reforms are having a positive effect.

What I really object to is the idea of enacting a complex, major new system that no one understands with lots of unintended consequences that cannot be undone. In other words, the Democrats must be stopped again, but we still need healthcare reform. Just not their preposterous and ponderous "solution" that breaks what isn't broken, and fails to fix what is.
No comments: